Last night’s meeting of the Manchester Board of Mayor and Aldermen is one of those where we just don’t know where to start, so I guess we’ll take it in order.

It appears as if a deal is nearing completion on the sale of the Bedford Street Parking lot in the Millyard as the board took action to authorize the development of a purchase and sale agreement.  Girard at Large has learned that the parcel is to be the home of a fairly major hotel facility, complete with a parking garage which will make some space available to the public.  Details will come forward publicly at the board’s next meeting, which is on August fourth.

The board also authorized the purchase of twenty three Amherst Street by the Manchester Development Corporation.  For those with a bit of longevity in the city, that’s the old Amherst Street Theatre, aka the Rex Theatre, at which yours truly saw Raiders of the Lost Ark many moons ago.  For those with a bit less longevity, it was last known as Club Liquid.

The board approved revised welfare guidelines submitted by Welfare Commissioner Paul Martineau, but not before things got ugly between Martineau and Alderman at-Large Joe Kelly Levasseur, who seemed to be of the opinion that the department should provide assistance to full time students and that those paying for cable TV, Internet and cell phones should not be disqualified from receiving assistance.  Martineau countered the department is there to provide for basic needs, including food, shelter, medicine and utilities in an emergency, not subsidize students or those who wanted cable TV or expensive cell phones.

Levasseur said Internet and cell phones were necessities in today’s world.  Martineau said recipients could access the Internet through the public library and job seekers could access it through the Department of Employment Security.  As to the cell phones, he said there are programs where people can get them for free.  Ward Twelve Alderman

O’Neil: Hm, maybe his position is too complicated for voters, too.

Oh, speaking of the Welfare Commissioner, Alderman at Large Dan O’Neil, at Martineau’s request, moved to amend the charter to change the position from being elected by the people to being appointed by the mayor and confirmed by the aldermen like every other department head.  There will be a public hearing on the question on August fourth.

It looks like some people matter more than others in Manchester.  Continuing on last night’s meeting, the board elected Theo Groh to fill the vacancy created by the resignation of Ward Three School Committeeman Christopher Stewart.  Groh was nominated by Ward Three Alderman Patrick Long and out polled former Ward Three School Committeeman Michael DeBlasi who was nominated by Levasseur and wasn’t going to run for the seat.  Groh, long a paid Democratic operative in the city, was handily defeated by Stewart in the last election and is expected to seek the seat again.

Levasseur also nominated Larraine Lencki to fill the vacancy created by the resignation of Ward Six Committeewoman Robyn Dunphy.  Somehow, that one got hung up on a question of whether or not someone could be nominated before the seat was actually vacant, which it becomes today.  Anyway, the crowd that wanted to suspend the rules to install Groh to ensure the residents of Ward Three had representation were a-okay with keeping nominations open until the next meeting to vote on nominations for Ward Six, depriving them of that same representation.    Yes, Corriveau was absent and they wanted to defer to him, but he could have told O’Neil who he wanted to nominate.  How much you wanna bet that the Dems will flip that seat too?

Gatsas vetoed the move to suspend the rules, by the way.

The ordinance making it illegal for anyone in a motor vehicle to give anything to someone in the public right of way also passed.  Ward Four Alderman Jim Roy opposed the ordinance saying it would force panhandlers into more aggressive ways of obtaining money to feed their drug habit.  Levasseur, Shaw and Hirschmann also opposed the ordinance.

There was quite the discussion on drug court, again.  A couple of things became clear as people discussed the forty five overdose deaths in the city and the more than four hundred over dose deaths year to date in the state, city officials are still looking for ways to get a drug court funded by the county and the idea that the legislature is going to do anything on a statewide level is a fairytale.  Twenty six percent of fatal overdoses in the city are by non-city residents, just so you know.  The police department will be providing data on where they come before the next meeting.

Manchester’s teachers are another step closer to having a contract.  After lengthy discussion, which we’ll discuss this morning, the aldermen voted to ratify and lay over the contract, meaning it was preliminarily approved with one more vote to confirm ratification pending.  Ward Four Alderman Jim Roy, Ward Seven Alderman Bill Shea, Ward Twelve Alderman Keith Hirschmann and Alderman at-Large Joe Levasseur were opposed.  Mayor Ted Gatsas withheld a veto pending a more thorough assessment of the budget impact, which will be presented on or before the next meeting.  Gatsas said the contract couldn’t be considered in a financial vacuum, as it had been last night.  The discussion made clear that the pact, by itself, would exceed the tax cap for the school budget.

Ludwig: Conflicted out of contract vote?

Controversy also erupted as Roy questioned whether or not Ward Two Alderman Ron Ludwig could vote on the contract under the charter given he’s married to a teacher covered by it.  After a brief recess, City Solicitor Tom Clark advised Ludwig to abstain on the vote and said he would do more in depth research before the next meeting. 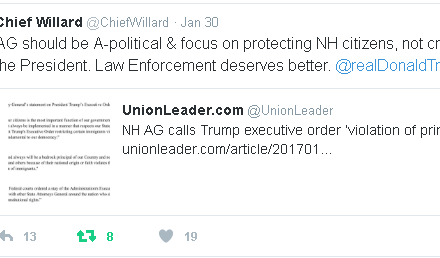