In the recent primary election, seven candidates for State Rep from Bedford banded together on a “ticket” to express their support for each other, and for the Republican platform. They did this because many voters have expressed suspicions that Democrats often pose as Republicans in order to be elected, and that the problem is getting worse.

There are also certain critics of Republicans, some of whom we note, are actually hypocritically supportive of Democrats themselves.

One such person is “Republican” Bill Greiner, a fairly recent mover to NH from New York. Here is our take on the “spin” you may have read from this outsider.

Our liberal colonizer lost big when three of our above-mentioned seven candidates — people who likely can actually be counted on to uphold Republican values while serving no personal agenda — came in first, second, and fourth. Greiner’s preferred candidates, some of them unknown to us as Republicans, placed third, fifth and sixth, with the sixth having squeaked in by virtue of only 4 votes. We noticed that a few of Greiner’s picks have traditionally been absent as participants in the Republican party at the local level. One even admitted disagreeing with the Republican platform.

Despite former New Yorker Greiner’s pathetic attempt to smear our own Linda Gould by pulling a false accusation out of his butt at the last minute, Gould topped the ticket for State Rep. Upon hearing of this attempted smear, the puzzled Gould noted that she is a NH native. We would add that she is also a respected 40-year resident of Bedford, and has absolutely no connection to the false pre-election information printed in the Patch. In addition, Kristin Noble, another NH native and subject of a similar smear that had no basis in fact, secured a position as delegate. Let us mention at this point, and with absolute certainty, that the subject of Bill Greiner’s ongoing and inexplicable hatred, does not “control” anyone, let alone people who do not even know him.

Perhaps Mr. Greiner should stop making this stuff up out of thin air. It sort of puts the kibosh on his credibility as he attempts to present himself as a political pundit, prognosticator, and worse yet, some sort of legitimate supporter of the Republican Party.

If this pre-election nastiness didn’t faze you, you’ve just got to be amazed at the Greiner post-election spin. While ignoring the significance of the outcome of the races for State Rep, Mr. Greiner uses hyperbole in describing the defeat of some candidates for delegate, in order to divert attention for his failures, and puff up his own importance. This was more vitriol further intended to fuel his bizarre and puzzling campaign of hatred against other Bedford residents who are actual Republicans.

Greiner, self-described “philanthropist”, futiley insists on spreading unfounded ideas about people he dislikes. Worse yet is the citing of town ordinances intended to create the impression of criminal activity by those people. Yet none of these accusations have ever proven true.

What Republican with no agenda supports Democrats in a general election?

We often hear about activities that discourage people from joining and invigorating the Republican party. Greiner’s attacks are done under the pretense that the objects of his hatred are not “Republicans” and have some other hidden “agenda”. Beware of this Alinsky style bait-and-switch tactic, because as you read of his history of supporting Democrats in general elections, you will ask yourself how he can accuse anyone else of not being a Republican.

The NH GOP has issued a stern warning about people who claim to be Republicans but are currently supporting candidates such as Chris Pappas, Lee Nyquist or Jeanne Shaheen in general elections. Said Chairman Horn:

“As Chairman of the NHGOP I will enforce all applicable bylaws that prohibit participation as members of the State Committee to any Republican that endorses or supports a Democrat against a Republican in the 2014 elections.”

Despite an attempt to put a spin on the sign issue, Greiner has in fact regularly demanded that Republicans he does not like remove their signs from roadways near his property, and has even attempted to get people fired from their jobs for their associations with people he does not like.

In the general election, Democrat Lee Nyquist will oppose the Republican candidate for NH Senate who does not apparently comply with Greiner’s personal agenda. Thus, as he did in the last election, Greiner will likely support Nyquist. In fact, in 2012, Greiner headed up a the committee to elect Nyquist. So any blathering about the “political winds” is just more hot air from Greiner.

Conclusion: residents of Bedford should no longer listen to the hypocritical rantings of Bill Greiner concerning Republicans. They should resist his underhanded tactics to control or punish those who don’t follow his direction, and beware of his penchant for making up stories. This behavior and historical support of Democrats in general elections is proof that Mr. Greiner is a person who picks and chooses, not based on party platform or values, but on a personal agenda that benefits only himself. He should never be taken seriously.

Thank goodness people are beginning to catch on to this and the results of the primary proved these tactics to be decidedly ineffective. 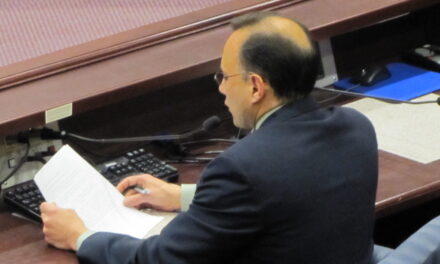