Ambrogi: Why wait for the public?

After the Manchester Board of School Committee came back from non-public session on Monday night, the fun continued.  Yes, after the watchful eyes of the media went home and the public went to sleep, board Vice-Chair Sarah Ambrogi moved to approve a one year contract extension with Superintendent Debra Livingston which included a one point three three percent pay raise retroactive to July first.  Ward Ten Committeeman John Avard’s appeal to let it sit on the table so the public had a chance to review and comment before the board’s vote fell on deaf ears as only Mayor Ted Gatsas and committeemen Artur Beaudry from Ward Nine, Debra Langton from Ward Two and Ross Terrio from Ward Seven opposed Ambrogi’s motion.  Ward Four Committeeman Amy Bradley was absent and did not vote.

Van Houten: Moves to restrict board member access to schools

Ward Twelve Committeeman Connie Van Houten attempted to pass the new visitors policy which requires school board members to make appointments with school principals to visit the schools in the discharge of their official duties and be accompanied through the buildings.  Ward Eight Committeeman Erika Connors supported the motion saying not every member of the school board has had a background check and that she would feel uncomfortable with them being in the schools with her children.  (Yup, she said that!)  Van Houten’s motion failed with Gatsas, Langton, Beaudry, Avard, Ted Rokas of Ward Five, Dan Bergeron of Ward Six and at-Large member Nancy Tessier opposed.  Giving you the names of the good guys on these votes, by the way.

The board also received and filed the mayor’s request to have board members pay one hundred percent of the cost of the now taxpayer subsidized health and dental benefits available to members if they take them.  After snide questions like “does this include you” from at-Large member Kathy Staub to the mayor and questions over conflicts of interest, only Gatsas, Langton, Rokas, Terrio and Beaudry opposed Avard’s motion to receive and file.  Note that every member currently taking the benefits voted to kill the request.

Also going nowhere fast is the mayor’s proposal to audit the health and dental insurance programs to ensure that only eligible dependents are covered.  In response to his question about the status of the request and his reference to a newspaper article reporting that Carroll County’s audit of their programs saw the removal of roughly half of the dependents from its dental plan, Coordination Committee Chair Ambrogi said they tabled it in committee because the mayor, who was at the recount of his race, wasn’t there to speak to it.   As he said in an interview here yesterday, his position on it is clear and he’s not sure why they would have put it off because he wasn’t there.

We did discuss these items briefly with Gatsas yesterday, but now that we’ve seen the video, we thought we’d expose on what went down for all to know.

News from our own backyard continues after

NH State House: Special Session could be a rough one.

Legislative leadership in the New Hampshire General Court has laid out its plan to combat the substance abuse epidemic as part of the Special Session on Nov. 18th.  The House will introduce a Special Session House Concurrent Resolution which, if passed, will go into effect immediately to establish a joint Substance Abuse Task Force.

The task force will be made up of twenty six House and Senate members representing a wide range of committees and will fully vet and debate a specific set of issues including:

A final report will be presented on January 6th and will serve as the basis for filing legislation.

“We believe this Task Force is the best approach to coming up with a comprehensive set of solutions. These are complex issues with huge consequences,” said House Majority Leader Richard Hinch, Republican from Merrimack.

Don’t expect this to be without controversy, however.  Girard at Large has heard from several legislators unhappy with the proscribed process which they say will not enable the General Court to properly vet legislation or the public to provide input.  Others are concerned that it does little, if anything, to include representation from Manchester.  While it is true that key legislative leaders are installed on this task force, it is also true that several of them, like Finance Committee Neal Kurk of Weare and Judiciary Committee Chair Robert Rowe of Amherst have been critical of Manchester for its attempts to address the issues surrounding the opioid epidemic and attempted to cast the problem as one merely affecting the city, which of course is as ridiculous as it is false.

In any event, it appears as if the measures Governor Margaret Wood Hassan wants passed by this special session are very unlikely to pass during the special .

The Manchester VA Medical Center, will have an observation of Veterans Day with a moment of silence at 11:00 this morning.  It will also host a Veterans Day Program at 2 this afternoon in the Granite State Room, Community Living Center followed by a social event.  Plans include an acoustical prelude, color guard, Pledge of Allegiance led by the Community Living Center Residents, remarks and a special Wreath Presentation to the Veterans of the Community Living Center. This will all be followed by a festive celebration including Ms. New Hampshire, Elvis Presley and topped off with ice cream and apple pie. It is about as American as it can get!  The public is welcome and they hope you join in the fun!

(Given that Manchester’s Veterans Day Parade has been canceled due to rain, they just might see a few more folks than normal, which would be great.  The VA also has other events planned for the week, which we’ve published at Girard at Large and linked to from this newscast for your convenience.)

The Manchester Police Department will host an entry-level police exam on Saturday, November twenty first.  THE DEADLINE FOR APPLICATION IS THIS THURSDAY, NOVEMBER 12th.  (Emphasis in the original!)  For further information or an application visit manchester p d dot com or feel free to contact Officer Carl Accorto at 7 9 2 5 4 5 2. 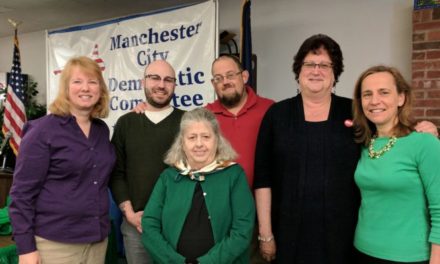