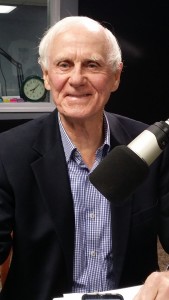 We were joined by Senator Gordon Humphrey, who started by sharing that he doesn’t remember a more worrisome time in our country’s history.  He then told us about his endorsement for Governor John Kasich and pointed out his credentials, starting with education.  Rich asked him about about Common Core, the Governor’s tendency to use the Government to to the Christian individual’s work and his stance on Expanded Medicaid.

(Hour 3b) Rich continued with Senator Humphrey and asked about Governor Kasich’s stance on comprehensive immigration reform and securing the border.  He told us what qualifies Governor Kasich to be President.  He pointed out why Donald Trump, among others, should not be President and took a call from our loyal listener Harriet Cady who wanted to know if and how the Governor will reduce the Government workforce.  Rich then asked about how the Governor will deal with ISIS and the global threat of terror.  They also discussed jobs and the economy.  Tune in for all the details.