Outcome Based Education (OBE) was all the fad in the 90’s until parents realized that their kids were not learning the academics but instead they saw a gradual shift from an academic based program to a system that attempted to change the values, attitudes and beliefs in children.  After that failed experiment on our children, you’d think those in the education establishment would  have learned.  Parents want their kids to be educated, not indoctrinated.

Fast forward to the Federal redesign in public education, and you can see that their redesign includes Competency Based Education. (CBE)  What’s the difference between OBE and CBE?  Not much.

It’s a return to the shift away from academics to dumbed down workforce training. Within this model there is a focus on workforce skills like collaboration, creativity, team work, etc.  All of these skills are certainly worthy skills to acquire but when math teachers are frustrated that they now have to water down their academic content to make sure their students are “collaborating,” it’s time to admit that this model is anti-literacy.

Some of those skills are are learned by playing on team sports, some have natural characteristics and others will learn by working on projects together.  The problem with CBE is it forces “competencies” on all teachers in all grades.

A couple of years ago I received a call from a parent whose son was home-schooled k-8.  She put him in Pinkerton Academy for 9th grade and was frustrated to see her son be forced to work on math projects in his high school math class.  She could see that this severely slowed down the learning process and would deny him a full course that year.  What he learned in a week could have been taught in a day or two.   Over the course of the year, he was denied learning important math concepts because the workforce skill of “collaboration” was now forced into his math class.  Students were required to work on projects together to learn how to “collaborate” instead of learn the math concepts.

OBE has also been criticized for changing the values, attitudes and beliefs in children.  Parents in the 90’s were highly critical of the attempt by schools to indoctrinate their children into political attitudes they didn’t share.  This was obvious a few years ago when Bedford students were required to read a book by a social activist called: Nickel and Dimed, On Not Getting By in America. This book was assigned in a Personal Finance class and was so politically biased that parents demanded it be replaced.  As a resident of Bedford, I attended that school board meeting and suggested good books on Personal Finance be assigned and pointed out that this was another example of how CBE works to influence students in a political mindset rather than teach the actual academic content.

This model does not allow a student to move forward in their class IF they do not change their values.  That should shock every parent in this country.  These may be religious, moral, political or any other value instilled by their parents but that’s why in the 90’s, this model was abandoned.  Parents could see that their children were being denied a quality education in the process.

Today this anti-literacy model is back in the New Hampshire schools because the New Hampshire Department of Education and the Board of Education believes this model should be in all schools.  Under Governor Hassan’s tenure, New Hampshire has implemented just about every Federal reform, CBE included.  So how is that working out for us?  That’s a good question and one that I asked of Heather Gage, Chief of Staff at the NH Dept. of Ed.  Here was her reply: 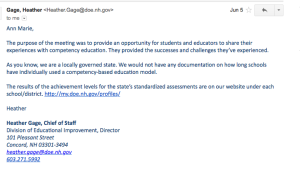 In other words, after years of CBE in our public schools they have no data on academic achievement levels and it doesn’t sound like there is any interest on their part to seek that information.

But let’s be honest, a workforce model isn’t there to improve academic outcomes, it’s there to make sure your kids have what the “state” feels is the right attitudes and workforce skills.  These are the MINIMUM skills and knowledge they are now forcing on districts, not the best.

The Common Core standards are MINIMUM standards for pubic school students and the CBE workforce skills focus on changing attitudes in children at the expense of academic literacy.  This is why elitists like Bill Gates who force this model wouldn’t dare put his children in a public school.

Governor Hassan’s legacy will be that she facilitated the dumbing down of public education in New Hampshire by following the federal education reform agenda versus leading our schools to academic excellence.

Heidi Sampson, member of the Maine Board of Education wrote in her letter to every State Representative and Senator in New Hampshire and highlighted the significant problems with CBE in public schools.  In Maine it’s called Proficiency Based Ed.  (PBE) It sounds good until you peel back the layers and the reality hits parents right in the face.

Here is the latest example of the CBE failures from a parent and former school board member in Rochester NH who sent testimony to the Senate Education Committee.  In her testimony she brings up why it’s important for parents to have INFORMED and WRITTEN CONSENT from parents before schools survey children.  As you can see, the information they are requiring from her son is invasive, personal but more importantly, he faces being held back if he does not provide it.

In a Competency Based Ed model, students do not progress if they don’t pass their competencies.  Parents assume that means they don’t move on if their child cannot answer academic questions like 2+2 = ?  But as we discovered in the 90’s, this isn’t about knowing your academics, this is about making sure kids express the right attitudes and values that now come from outside the home.

CBE along with the PACE assessments are going to further dumb down education in New Hampshire and it doesn’t look like anyone at the Department of Ed is concerned about that.

Dear State Senators,
I understand that you are considering SB320, relative to non-academic, and often intrusive surveys that have been taking a life of their own on in the public schools. I just finished a 2 year stint on the Rochester School Board. During that time, a few of us were trying to get a policy passed that would require an opt in rather than an opt out for these surveys. We were unable to get that passed.

The timing of SB320 is rather perfect as I have some examples of what parents are concerned about. Last Thursday, was the beginning of second semester 2015-2016 school year. My son, who is a freshman at Spaulding High started his mandatory Health class. The class/homework given on Thursday was a survey that wanted the following information.

Write about yourself. Please include the following.
a. Physical traits: your age, gender, height, body build, physical abilities, health issues?
b. Social traits: People with whom you live, types of friends you have, how you behave with people, are you comfortable being alone?
c. Intellectual traits: Learn easy/hard. Favorite activities, hobbies and interests, strengths and weaknesses, favorite classes?
d. Emotional traits: How you express emotion, common emotions for you?
e. Spiritual traits: What motivates you, what ideals are important to you?
Talk about you educational experience. What schools have you attended, what are your favorite classes, who was your favorite teacher and why?

Is there anything a teacher should know about you that would help them teach you better?

You might assume that this teacher was just wanting to get to know his students. But this is a graded assignment, complete with a rubric that grades from Advanced to Not Yet Competent.

My guess is that my son will receive a NYC because he did not give the answers that are to be expected. He instead seemed to channel a character from Parks and Recreation, Ron Swanson. He explained in complete sentences why these questions were inappropriate and all of his pertinent school information, can be found in his school records.

Day 2
Friday was more of the same. This survey was to be completed and passed in at the end of class.

There were upwards of 60 true or false questions, I only have screenshots of 2 of the pages. Here is an example of a few.

I only eat when I am hungry.
I do not smoke.
I do not get sick more than twice a year.
I like my body.
I would describe myself as a junk food junkie.
I can go to a party and have a good time
I like people.
I am an intelligent person.
I have a clear sense of right and wrong.

He passed this assignment in blank and without his name on it. And therefore, will get a NYC on that assignment as well.

On the school board, we spent a vast amount of time looking at statistics, and scores. Maybe, just maybe if we spent more time teaching academics, and less on non-academic surveys, our kids will be given a chance to achieve. Health class used to be about being able to identify the digestive, and nervous system. To know what our body parts are and how they work. We were taught about good hygiene and the four food groups, pyramid or whatever the latest food fad was. It wasn’t meant to create a dossier on our kids.

I am asking you to pass SB320, and let the Teachers get back to teaching, and the students get back to learning.

Are NH Schools Practicing Mental Health Quackery On Your Kids? 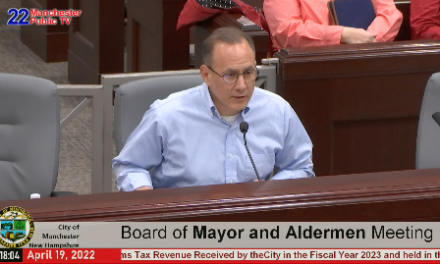