The Manchester School Board’s Committee on Curriculum and Instruction is holding a public forum tonight to discuss the administration’s proposed Curriculum Management Plan.  The plan was slated for approval on the board’s January eleventh meeting agenda, but was referred back to committee after several members, including many newcomers, expressed concerns.  At the subsequent meeting of the Curriculum and Instruction Committee on January twenty sixth, several members criticized the document on multiple fronts, including various definitions, timetables and a general failure to include parents and the public in curricular reviews and recommendations.  It directed the administration to post the document on its Web site and work with Committee Chair Debra Langton to set a date for a public hearing on the document.

At its meeting on February tenth, the committee again directed that the matter be posted to the district’s Web site and established tonight’s meeting as administrators failed to act following the meeting on January twenty sixth.  The purpose of tonight’s hearing is to not only to receive feedback from members of the public, but also to enable them to ask questions of the committee and administration and receive answers.  The typical three minute time limit on comments before a meeting will not apply as the purpose of the meeting is to take the public’s input and answer questions.  The meeting will begin at 6 in the Aldermanic Chambers on the third floor of City Hall.  The draft plan has been linked to in today’s news read for your convenience with an invitation to leave your comments or send them to Committeeman Rich Girard at school news at Girard at large dot com. 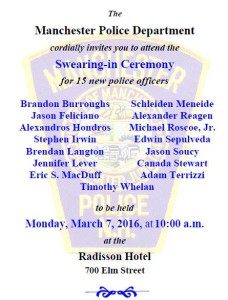 MPD: New officers to be sworn in

The Manchester Police Department will hold a swearing in ceremony for fifteen new officers this morning at the Center of New Hampshire Radisson Hotel beginning at ten.  Department spokesman Lt. Brian O’Keefe said it is one of the largest classes the department has hired in recent years.  It comes on the heels of a record class of more than three hundred who took the police exam in November.  Despite the large number of hires, the department will continue to operate below its funded compliment of two hundred thirty seven sworn officers, though they will substantially close the gap.  Police Chief Nick Willard credits, in part, the large number of applicants to a change in the department’s policy regarding tattoos.  He’s also said the department’s ability to hire new officers has been hampered by the small number of times the State Police Academy holds classes to certify new officers.  Following their swearing in, the new hires will undergo at least six weeks of training in Manchester’s own police academy to get them ready for the streets.  The public is welcome to attend this morning’s ceremony.

Town Meeting/Election Day tomorrow for many

Tomorrow is Town Meeting Day in many communities across our listening area.  If it’s not Town Meeting Day, it’s Town Election Day were voters will decide everything from school and town operating budgets, to union employee pay raises and decide as number of races for town and school offices.  In Hooksett, school voters have a ten year tuition contract with the Manchester School District on the ballot.  Voters in Candia will be asked to approve a twenty year contract with Pinkerton Academy.  In Auburn, voters will be asked to approve changes to the zoning ordinance.  Bedford voters will be asked to eliminate the residency requirement for the town manager.  Voters in Goffstown will be asked to eliminate the town’s sewer commission, which has caused quite a firestorm in town.  Citizen Petition Warrant Articles to remove towns from school districts are on the ballot in Hampstead and Sandown, both of which have the joy of Earl Metzler’s superintendency.   Of course, there are multiple warrant articles in multiple communities, so hit your town or school district Web site before tomorrow to get up to speed.  CORRECTION:  Warrant Article 10 in Goffstown was about a zoning change which asked the following question:  “Use of a Non-conforming lot, by adding a new subsection – 14.7.3.3 that states: “Accessory buildings not creating an additional dwelling unit and not part of the existing principal building on the lot that meet Section 14.7.3.2 shall not require a Special Exception.?”  (Planning Board Chairman Barbara Griffin was opposed, making it a hotly contested item.)

Senator Kelly Ayotte will have a primary this year.  Jim Rubens, who sought the G O P nomination to take on Senator Jeanne Shaheen has announced he will challenge Ayotte in the primary.  Rubens, who was our guest earlier in the show, said that Ayotte had quote “gone Washington” and had taken positions against ordinary Americans and violated promises she made as a candidate in two thousand ten.

The Oversight and Investigations Subcommittee of the House Veterans’ Affairs Committee held a hearing at New Hampshire’s National Guard Headquarters on Friday to investigate pain management and prescription practices at the Veterans Administration.  Representatives Frank Guinta and Ann McLane Kuster were among the members who spoke with witnesses from the V A and other veteran’s health organizations.  Participants talked about the over-prescribing of opiates at V A health facilities.  The V A is exploring alternative treatments and therapies to narcotic painkillers for treating chronic pain. 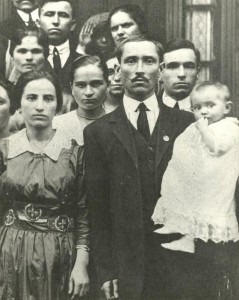 The Manchester Historic Association is opening a new exhibit this week called “Manchester’s Immigrants: Then and Now.”  The exhibit will be unveiled at the Millyard Museum during a special event on Wednesday, March 9th from 5:30 to 7:30 PM.  It will showcase photographs that document the lives of immigrants from the earliest French-Canadian, Irish, and German mill workers to the more recent Bosnian, Sudanese, and Bhutanese immigrants.  By displaying photos from the earlier immigrants with images of current immigrants and refugees, Manchester’s historic role as a social and cultural melting pot will come into full focus.  The exhibit will be on display through May 7th.  Additional details are available at Manchester historic dot org. 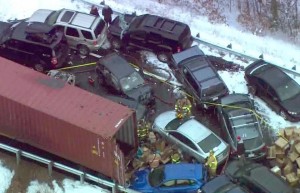 The light snow on Friday morning caused slippery road conditions that led to a traffic incident on I-93 South around the town line between Derry and Windham.  Forty cars were involved in a pileup on the highway that left the road closed for many hours.  The accident was responded to by the New Hampshire State Police and the Windham, Derry, Londonderry, Hudson, Pelham, Manchester and Hooksett fire departments.  In addition to this pile up, the Windham Fire Department received three other calls around the same time for cars being rolled over on the highway in the northbound lane.  Approximately fifteen people were transported to hospitals including C M C, Elliot and Parkland Medical Center, with non-life-threatening injuries, and many cars had to be towed.