There’s been another shooting in the Queen City.  Police last night were called to five thirty six Beech Street at about a quarter to eleven.  When they arrived, the thirty year old male victim was being treated for a gunshot wound in his leg by personnel from the Manchester Fire Department and ambulance company A M R.  Police say the victim, who they did not name, is a city resident but does not live at that address.  The suspect fled the area prior to police arriving.  While the investigation is still in its infancy, the Manchester Police Department doesn’t believe the shooter poses a current threat to the public, however they’re asking anyone with information about this incident to call them at 6 6 8 8 7 1 1 or Manchester Crime Line at 6 2 4 4 0 4 0 where your anonymous tip can lead to a cash reward. 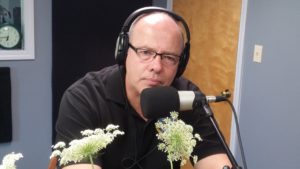 For those of you who just want to blame the guns for murder or attempted murder, keep your powder dry.  New Hampshire Attorney General Joseph Foster and Manchester Police Chief Nick Willard announced that a homicide investigation was launched yesterday afternoon after an injured adult male was brought to a local hospital with a stab wound.  He later died from his wounds.  The deceased’s identity is being withheld pending notification of next of kin.

Based on the information gathered so far, it appears that the victim was involved in a fight with another man in the vicinity of three eighty five Union Street at about 4:00 o’clock yesterday.  The assailant is described as a white male, approximately 5 foot 7, with a thin build, “buzz cut” hair, and a tattoo on the right side of his face and or neck.  He was last seen wearing a leather jacket, gray or brown hooded sweatshirt and khaki pants.  The assailant may still have the knife he is believed to have used in the attack.  Anyone with information about the incident is asked to contact Detective Joe Lorenzo at 7 9 2 5 5 0 7 or Manchester Crime Line at 6 2 4 4 0 4 0. 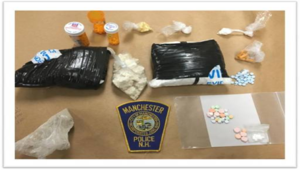 Between what was in their pockets and in their vehicle, which was seized and searched after obtaining a warrant, they had thirty five grams of heroin, eight hundred eighty three grams of coke, ninety eight grams of crack, various prescription pills and almost eighty three hundred dollars in cash.  Needless to say they’ve been charged with a variety of crimes, including possession with intent to distribute.  The cops say the street value of the confiscated drugs is sixty six thousand dollars.

The Manchester Fire Department is providing some good news in the battle against the opioid epidemic.  Saying things are going quote unquote quite well, Emergency Services Officer Christopher Hickey reported that the Safe Station initiative welcomed its eight hundredth visit on Thanksgiving Day.  Of the eight hundred visits in just six months, Hickey said eighty percent were from people coming in for the first time.  The twenty percent who were repeat visitors struggling on the road to recovery were being provided the services they need, said Hickey, who also wrote there is now “some consistent, positive hard evidence that efforts in law enforcement, medical, rescue, and community response are beginning to work.”  He cited overdose and fatality stats comparing August through November of last year and this year which showed fifty one fewer overdoses and five fewer deaths, a reduction of eighteen and seventeen percent respectively.  Wrote Hickey quote:

Countless numbers of families affected by this now have hope and still have their loved ones with them for this Holiday season because of the efforts of this entire community.  You can’t argue with progress and you can’t argue with the data.  The tides are turning, and we all now have an idea of what our role in this situation is.  What we all do as a community works.

Manchester School Superintendent Dr. Bolgen Vargas has taken yet another step to show there’s a new sheriff in town, so to speak.  Vargas sent a memo to the district’s administrative staff last week requiring they receive his approval before seeking advice from the district’s attorney.  Vargas, who cited rising legal fees, said he took the action quote “because on several occasions we have involved the lawyer on issues about which we should be informed and knowledgeable enough as part of our professional responsibility and judgment to proceed without counsel. ”

The town of Derry seeks to remind residents of the Winter Parking Ban in effect from November 15th to April 1st.  The town ordinance prohibits parking on all street and all municipal parking lots between Midnight and 6:00.  Violators are subject to ticketing and/or towing of their vehicle.  Any questions may be directed to the D P W at 4 3 2 6 1 4 4.