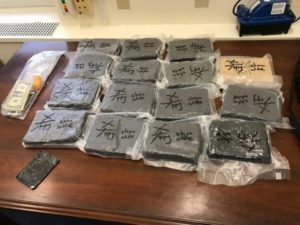 Methuen, Massachusetts Mayor Stephen Zanni and Police Chief Joseph Solomon reported yesterday that the Methuen Police Department arrested a man in possession of 15 kilos of fentanyl, which had a street value of one point two million dollars.  Police say they received a 9 1 1 call reporting a man with a gun in a taxi yesterday.  The caller gave a detailed description of the man who allegedly got out of the taxi, retrieved a gun from a duffel bag and concealed it on his person before re-entering the vehicle.  Officers located thirty two year old Robinson Rojas-Rosario of Queens, New York sitting in the backseat of the cab with a duffel bag on the floor next to him.  This arrest comes just days after a 10-month-old Methuen baby was exposed to fentanyl and hospitalized.  Solomon said the bust was quote “a great example of why we tell people to say something if they see something.”  Rojas-Rosario is being held on $100,000 bail at the Methuen Police Station pending arraignment in Lawrence District Court. 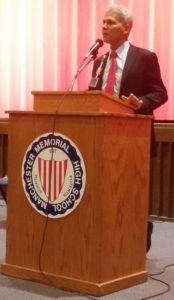 Vargas:  On the road with the budget

Manchester School Superintendent Dr. Bolgen Vargas is going to take his presentation identifying the drivers of the school district’s budget woes on the road.  An announcement released by the district says that before any solutions to the budget gap can be considered, quote “it is important to understand the drivers of the projected shortfall, as well as the obligations required of the budget to fund all of our schools.”  To help put that word out, Vargas will host two public forums to present the information to the public and ask for ways to solve the district’s budget challenges.  The first will is on Tuesday, January 10th at the Middle School at Parkside, the second will be on Wednesday January 11th at Memorial High School.  Both start at six P M.

The Board of School Committee will hold its regular monthly meeting on Monday, January ninth, starting at seven.

Republican Governor-Elect Chris Sununu has announced initial members of his staff.  Longtime family friend and advisor Paul Collins, who is co-chair of the transition team, will serve as Senior Advisor to the Governor.

John Formella, an attorney with Pierce Atwood, LLP who has a background in commercial and environmental matters, will serve as Legal Counsel.

Charlie Arlinghaus, President of the Josiah Bartlett Center and budget advisor to the transition team, will serve as Interim Budget Director.

David Abrams, who served as Sununu’s campaign communications director and is currently spokesman for the transition team will stay on as Communications Director.

Sununu said he was proud to have assembled a talented team of experienced professionals who will assist him in delivering results for the state’s citizens.

Looks like a fight is brewing in Concord over the Good Samaritan Law passed last session.  The law prevents police officers from arresting those using illegal drugs at the scene of a drug overdose. The idea behind the law was to encourage users to call 9 1 1 when overdoses occurred, claiming that users afraid of arrest would wait until they got rid of the evidence before calling.  The law is set to sunset in two thousand eighteen and a bill has been introduced by the original bill’s sponsor, State Rep. Amanda Bouldin, Democrat from Manchester Ward Five, to make the law permanent.  Since its passage, law enforcement and political figures in Manchester, including Mayor Ted Gatsas, have expressed concern with the law’s unintended consequences.  We’ll keep you up to date on this one.