Maloney to Levasseur: Step Down Now!

This is the testimony of Steve Maloney, President of the Manchester Police Patrolman’s Association regarding the false claims made by Alderman at Large Joe Kelly Levasseur.

Thank you for allowing me to speak, I was in the same position approximately one year ago. I, along with other officers  spoke out against the despicable comments made by one of your

colleagues. Comments  that disparaged the men and women of the MPD. That night we asked the alderman to step down and apologize. We also asked the board of aldermen to condemn the words and actions of the alderman. Besides a brief apology by the mayor on behalf of the citizens of Manchester, our comments seemed to fall on deaf ears. Later that night, the alderman in question decided to approach me after the meeting in a hostile manner. After a brief exchange of words to include me asking the alderman why he felt it was necessary to get down on his knees and mimic me just a few weeks earlier on his public access TV show, the alderman took off running down the street screaming for the chief to go back to Bedford .

Luckily for me, this verbal exchange was witnessed by several people, including a few alderman seated here tonight. I say luckily, because several months later, the alderman made a false allegation to the chief claiming I assaulted him while the chief sat back and watched. The chief witnessed the exchange and knew the alderman was lying, but needed to send the claim to the Atty. Gen anyway.. He knew full well that another lie of “a cover-up”would follow if he didn’t.

The result was a full-blown taxpayer-funded investigation by the Atty. Gen.  I was questioned by investigators for a lengthy period of time. My name was splashed across the news with the accusation that I assaulted a political leader of the city. During this time my teenage daughters came to me telling me friends saw me in the paper, and that I was being investigated by the state for a crime. I could see the nervous stress in their eyes did not dissipate even after I assured them that their father did not commit a crime. I had a brother who happens to be the chief federal probation officer for the state of Massachusetts, calling me asking me if I had committed a crime. I had worried family members asking me if I’d be all right.

The end result of this extended investigation determined what I had always known to be true. The claim was a lie. I should have known that a man that would get down on his knees and make fun of my height, call officers dopes and idiots, call a respected member of a different political party fat pig, would have no problem making up a lie to end my career. Unfortunately for this alderman, his lies were exposed by a comprehensive AG report.

Unlike others in the past, I will not sit back idly while he smears my good name and reputation.  A reputation that I built for 23 years protecting the citizens of Manchester, a solid reputation as a professional that cares about his membership as well as the citizens we protect. If this alderman thinks for one minute that I will not defend my reputation, using every avenue possible, he is sadly mistaken .

At this time I’m also putting the city on notice. As an employee of this city, I have a right to come to work and not be falsely accused of a crime while being harassed and intimidated by a city leader .  Why is the city not doing anything to protect me from this alderman’s hostile actions? What is the city going to do about this? So far I get the feeling that I’m on my own. I’m hoping that’s not the case.

I would like to end with these words. Why are we as a society continuing to let this alderman speak with impunity?  To spew out lie after lie, to ruin people’s reputations without batting an eye, to make jokes about someone’s physical appearance on a taxpayer-funded public access show. To send bizarre late-night emails to department heads complaining about their employees and demanding some demented form of respect. This is not a private citizen exercising his fourth amendment right. This is an elected official that has great responsibility for the office he keeps. This is a city leader creating a hostile work environment for an entire department. What message are we sending to our citizens? That being a bully is wrong, unless you are an alderman?  it’s not acceptable to create a hostile work place, to lie, to make up false stories about people, call people whatever you want, unless you’re an alderman? I’m not sure if I want that message sent to my children.

On several occasions this alderman has alluded to his constituents that the officers standing behind me are unprofessional and dishonest. He is constantly stating that the officers of the MPD are intimidating him. In fact, just the opposite is occurring. The police department I am damn proud to be a part of has demonstrated proper procedure, truthfulness, patients in the eye of adversity, and professionalism. The AG report clearly confirmed that. Only this alderman has used his power of his office to intimidate. In my opinion, that is the true essence of a coward! Certainly not the actions of a leader !

Go back to being a private citizen! Where you can do and say any idiotic thing you want. Apologize to all the brave officers standing behind me that you have vilified and condemned. Only then will you gain an ounce of respect that you so sorely crave. 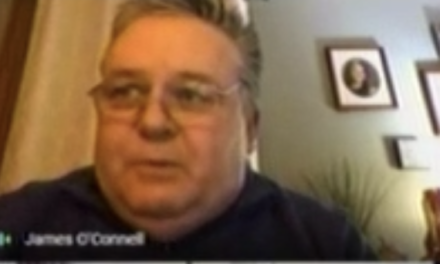