Fireworks were seen at last night’s meeting of the Manchester Board of Mayor and Aldermen as budget issues came to a head.  In a surprise move, Alderman at-Large Dan O’Neil, Chairman of the Board, distributed a letter addressed to Mayor Ted Gatsas under new business.  In the letter, O’Neil asked Gatsas to quantify the impact of his budget on city services and detail how, if his budget was enacted by default, he would manage without service cuts or layoffs.  Gatsas blasted the move saying it was an example of the political paralysis he urged the board to avoid in his budget address and that if he had to manage the budget he would be able

Gatsas: Show me your proposals!

to so long as the board let him manage it and not stand in his way as they’ve done with his request to drop the number of firefighters on a shift from forty six to forty two.  O’Neil and Alderman at-Large Joe Kelly Levasseur pressed Gatsas on whether or not he agreed the city needed to override the tax cap, but he didn’t take the bait saying he didn’t have a vote on whether or not to override it.  He also criticized the aldermen saying that, with the exception of Ward 4 Alderman Jim Roy, no alderman had spoken with him about any budget plans or proposal and called out O’Neil for demanding proposals when he wasn’t offering any of his own.  Ward 7 Alderman Bill Shea called for cooperation and calm saying that everybody should come forward and work with him or other aldermen who are developing alternative budgets to provide their ideas and suggestions.  We’ve linked to our Live Blog Forum of the meeting so you can get all the details.

In other business, the aldermen approved hiking parking fees and extending hours of enforcement last night, but they killed the proposed resident parking permit fee.   They also revisited whether or not to waive fees for a festival sponsored by the Granite State Brewers Association and hosted by Milly’s Tavern with proceeds to benefit New Horizons.  They waived two hundred of the five hundred bucks in fees after a long discussion centering around whether or not New Horizons would actually get any dough and whether or not it was a good idea to assess fees on new event coming downtown.  So, just to be clear, assessing parking and permit fees discourages people from living and holding events downtown, but hiking parking fees doesn’t deter businesses or its customers from coming downtown.  Got that?  The board also asked the Water Works to revisit their new policy governing horseback riding on their land after horse owners showed up in force once again to express their displeasure with the move and what they said is the faulty science behind it.  Expect the Water Works to give the aldermen a presentation at a coming meeting on the matter.

The Hooksett School Board decided to seek legal counsel last night after parents requesting reimbursement of tuition paid to other than Manchester schools pressed their case that the administration had erred in not rebating them the reconciled tuition payed to Manchester.  They pointed to letters sent by the district saying they were responsible for paying the difference between what Manchester was paid for tuition and what their chosen school charged.  They say the district paid Manchester’s estimated tuition rate, but not the final costs which are assessed

later in the school year.  While Board Member Todd Lizotte rallied around the policy in place rather than the letter, arguing that the base tuition rate they were obligated to was the estimated rate Manchester initially charged each year, Board Member John Lyscars said Lizotte mistakenly left out a word in his reading of the policy and that it seemed the board was obligated to pay the quote unquote “full tuition” paid to Manchester.  Turns out Lizotte had a policy revision that was four years older than the one Lyscars had.

On four to three votes, the board also approved motions to negotiate another one year enrollment agreement with Pinkerton Academy for their seventh grade class and send a letter to Manchester Superintendent Debra Livingston asking whether or not the district would allow seventh graders who went to Manchester next year to remain in school if there was no replacement for the current contract that expires in two thousand eighteen.  Board Vice Chair Amy Boilard opposed sending the letter noting that the board had had no communication with Manchester and she thought the first contact should be a face to face meeting with the superintendent not a letter like that.

The Bedford Police Department is warning of a telephone scam.  Seems scammers claiming to be from the IRS are calling  residents claiming they owed a large amount of money which, if not paid, would lead to their arrest.  To remedy the situation, the caller asks the potential victim to send them payment via a pre-paid debit or credit card.  Cops say you should be aware that this is a scam and that you should be skeptical of anyone calling asking for your any personal information or for payment in the form of a pre-paid gift, credit or debit card.  They urged anyone receiving any such calls to notify their local police department.

That’s news from our own backyard, Girard at Large hour ___ is on its way. 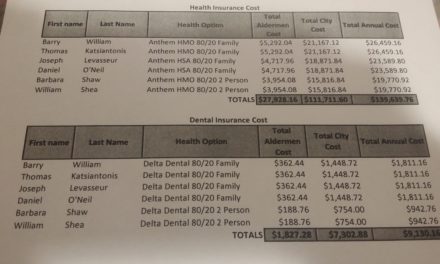