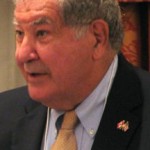 D’Allesandro: The other half.

It was busy day in the New Hampshire Senate yesterday.  The senate passed S B 3 2 3, which allows hospital security officers to restrain patients who become physically violent and a danger to staff and other patients.  Senators Kevin Avard, Republican from Nashua, and Casino Lou D’Allesandro, Democrat from Manchester, a political odd couple if ever there was one, teamed up to pass the bill.

S B 5 15 was also passed.  It provides that, in a proceeding under the child protection act, a medical diagnosis of neonatal syndrome based on a parent’s use of non-prescription drugs or evidence of a custodial parent’s opioid drug abuse or dependence shall constitute evidence of child neglect.  The bill also permits the court to order periodic alcohol or drug testing and provides that the parent may be responsible for the cost of such tests.

Boutin: It’s for the children

The Senate passed senate bills, 5 3 7 and 5 3 8, to strengthen child abuse prevention.  The bill’s prime sponsor, and chair of the Commission to Review Child Abuse Fatalities, Senator David Boutin, Republican from Hooksett, said the bills give the Division of Children Youth and Families greater authority to request permission by a judge to remove children from an unsafe home in emergency situations and place them in protective custody.  They also increase the period of time child abuse reports must be held by child protective services offices.

Also passed was SB 4 6 5, which establishes a penalty for the distribution of private, sexual images without prior consent.  Senator Sharon Carson, Republican from Londonderry, said the legislation was necessary because of technological advances and there being no clear way to prosecute individuals who are intentionally causing harm by posting or sharing explicit images without permission.  Said Carson, quote:

The Senate approved S B 5 0 9, that would change the procedure for investigating new voters who do not confirm their status in New Hampshire.  In support of the bill, Senator Regina Birdsell, Republican from Hampstead, said, quote:

“This bill allows the Secretary of State’s office to initiate the new voter registration verification process, freeing up capacity for the Attorney General’s office to investigate specific cases of voter fraud. This change increases protections for New Hampshire residents’ right to vote by strengthening the enforcement of voter laws in our state.”

Morse: Its for the water

The Senate also sent bill S B 3 80 to Governor Margaret Wood Hassan.  The bill establishes a drinking and ground water trust fund to restore or protect those resources, and establishes the Drinking Water and Groundwater Advisory Commission.  The bill’s sponsor, Senate President Chuck Morse, Republican from Salem, said the bill establishes a trust fund quote “for the sole purpose of directing settlement funds to be used specifically for water restoration and preservation projects as well as local remediation programs.”

“The concept of utilizing millions of dollars in toll credits for this venture raised an immediate flag. We are elected to be responsible stewards of taxpayer dollars, and not to play these types of irresponsible games with state finances.  I don’t look favorably on expensive proposals to study the even more expensive commuter rail boondoggle, and a bipartisan majority of my House colleagues agreed.”

In victories for Right to Know advocates, the House passed H B 14 19 which requires votes cast by elected officials in non-public session to be recorded, H B 14 18, which requires minutes of non-public meetings to be kept in the same detail as public meetings and H B 13 9 5, which allows long term records to be stored in portable document formats, or P D Fs.  Interestingly, the House also voted to kill H B 14 6 5, which would have required roll call votes in legislative committees be recorded.  Gotta love it…rules for you, but not for me.

Manchester’s Public Health Director Tim Soucy, who appears on this radio show every other Wednesday for our Public Health and Wellness segment, is asking the Manchester School District for permission to supply school nurses with Narcan, the drug that revives those who’ve overdosed on heroin, fentanyl and other opioids.  In the letter, which is on Monday’s Committee on Coordination and Administration agenda, Soucy says he believes it would be “prudent” for the nurses to have the rescue drug as part of their emergency supplies given the raging epidemic confronting the city.