Yesterday the state Senate Finance Committee and members of the Senate Health and Human Services Committee held a hearing on H B 1 6 9 6, which reauthorizes the state’s Expanded Medicaid program.  The hearing angered opponents who charged the bill, which would otherwise undergo a hearing at each committee before going to the Senate Floor, was being rammed through.

“This legislation is a responsible, coordinated effort to continue providing health care to low-wage earners to help them transition to independence, while keeping the cost burden on the Federal Government and not New Hampshire taxpayers.”

Health and Human Services Committee Chairman Senator Andy Sanborn, Republican from Bedford, whose committee was effectively bypassed by the hearing, disagreed with Bradley’s assessment of the bill.  Said Sanborn quote:

“The Federal Government (requires) free emergency care to anyone who needs it and the State of New Hampshire reimburses hospitals for this care.  With implementation of Medicaid expansion, this uncompensated care only fell by $22 million, yet the state spent $250 million in additional money to facilitate this program.  Next year, uncompensated care is not projected to decrease at all, yet state contributions increase to $450 million.”

“Seeing the State fail in its obligation to help those in need on the Developmental Disabilities wait-list, mental health and (addiction) issues, spending $450 million to provide free health insurance to able-bodied adults is the wrong priority for New Hampshire.”

“I am disappointed that there are no financial protections for taxpayers and despite claims this plan does not raise or create new taxes, the costs to continue the NH Health Protection Plan will be passed along in higher insurance rates and health care costs…Our efforts should be focused on cutting health care costs for everyone and not on giving free health insurance to able-bodied, childless adults.”

The Goffstown School Board unanimously approved the nomination of Gerri St. Gelais as Bartlett Elementary School’s new principal.  St. Gelais will replace Principal David Bousquet on July first.  Bousquet is retiring after seventeen years.  Superintendent Brian Balke said he is a great principal and a dedicated educator who created and nurtured a school environment that is warm and welcoming to families.  Balke said Bousquet will be dearly missed and wished him the best in retirement.

Goffstown School Board Chair Dian McCarthy said the school board was pleased to welcome St. Gelais back to Goffstown.  Quote:

“Mrs. St. Gelais is committed to creating a positive school environment where students and staff are valued and reach their full potential.”

From the campaign trail, it looks like District Two State Senator Jeanie Forrester, Republican from Meredith, will enter the governor’s race.  The fifty seven year old Forrester is serving her third term in the senate and chairs the Finance Committee.  Her entry into the race brings to four the number of G O P candidates in search of their party’s nomination.  District Three Executive Councilor Chris Sununu, Wilton State Rep. Frank Edelblut and Manchester Mayor Ted Gatsas have already declared their candidacies. 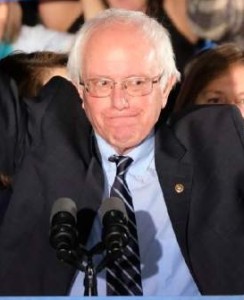 Also from the campaign trail, Hilary Clinton “felt the Bern” yesterday.  While she won big in Arizona, she got trounced in Idaho and Utah by rival Bernie Sanders, who made campaign stops in California yesterday.  Inasmuch as California is the last primary of the election, observers believe Sanders’ appearances there were a message to Clinton and the Democratic Party and that was they’re in it until the end.

On the Republican side, despite finishing a distant third in Utah, where he received just fourteen percent of the vote to Senator Ted Cruz’s sixty nine percent and Governor John Kasich’s seventeen, Donald Trump extended his delegate lead by another eighteen over second place Cruz; having handily won the big prize of the day, Arizona.  Trump thumped Cruz and Kasich, winning more than forty seven percent of the vote.  Cruz garnered just under twenty five percent.  Kasich received ten.