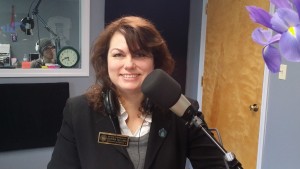 Sullivan: Bill going to the gov.

It was a busy day in the New Hampshire Senate, yesterday.  Among the items addressed was House Bill 1 0 3 which requires school districts to provide notice to parents and legal guardians of course material involving discussion of human sexuality or human sexual education at least two weeks in advance of being used in the classroom.  Bill sponsor, State Rep. Victoria Sullivan, Republican from Manchester’s Ward Nine, thanked the senate for passing the measure, which passed the General Court last year, only to be vetoed by then Governor Margaret Wood Hassan.  Governor Christopher Sununu is expected to sign the bill, which was opposed by the N H School Boards Association, N H School Administrators Association, teachers unions, even Planned Parenthood.  Can’t let those pesky parents know when you’re going to get into the birds and the bees with their kids.  Nope.

Looks like the Senate and the House may be in for a showdown over the funding of full day Kindergarten.  Despite the House having removed full day funding from its budget proposal, the Senate voted  yesterday to fund it.  Senate Bill 1 9 1’s passage was praised by Majority Leader Jeb Bradley who said funding full day kindergarten was quote “the right thing to do.”  The bill would target aid toward needier school districts.  Sununu praised the Senate’s vote, saying he’s heard from citizens that quote “this is a priority of theirs.”   Sununu called on the House to quote “embrace this important legislation.”  I guess he missed the part where they embraced it with a budget death grip.

District Twelve Republican State Senator Kevin Avard’s Food Stamp Reform Bill, Senate Bill 7, also won the senate’s approval.  The bill was amended to establish the Granite Workforce pilot program, which would use allowable excess reserve funds from the Temporary Assistance for Needy Families Fund to be used for workforce development and helping citizens overcome barriers to work like transportation, childcare and education or skills training.  After removing barriers to work, participants will be placed in unfilled jobs, providing services to New Hampshire employers who are struggling to fill these positions.

The main body of the bill restores federal eligibility standards to the state program, includes an asset test, withholds food stamps from parents who owe child support and imposes a work requirement, which can include volunteer work, on able bodied, childless adults.  Avard said quote:

These measures are designed to help low-income participants break the cycle of poverty and move them from living on the margin to the middle class and beyond.

Bridsell: Bill is a fraud on voters that enshrines voter fraud

And in a travesty of justice, the Senate passed Senate Bill 3, despite my epic rant on the topic yesterday.  It was a party line vote that had the Democrats screaming it was going to make it harder to vote and Republicans saying it was going to make it easier.  Believe the G O P on this one.  The bill, sponsored by Senator Regina Birdsell, Republican from Hampstead, actually says that residency at an institution of higher learning constitutes residency for the purposes of voter registration.  The bill also allows those who refuse to show proof of address at the time of registration to vote, so long as they promise to come back later and give their information, because we all know that people who cheat will come back with the proof, right?  In praising the bill’s passage, Birdsell said quote:

The passage of this legislation in the Senate today is a considerable step forward in strengthening the integrity of every ballot cast in a New Hampshire election.

What she didn’t say was that’s because it legalizes the otherwise illegal behavior, the constitution of the state notwithstanding.

Hannan (R): More of the same from MEA

Sue Ellen Hannan will remain President of the Manchester Education Association.  She defeated challenger Sonja Witkowski by a vote of one eighty one to one forty six to earn a second two year term.  The union has about a thousand members.  Witkowski, who was a guest on this show, said, among the reasons, she was running was to open dialogue with those who don’t always agree with the union’s point of view and speak up on educational matters, not just when pay raises and budgets are under discussion.  Looks like we’ll continue to hear from the union at contract and budget time and it will continue to preach to its own believers.  Such a shame. 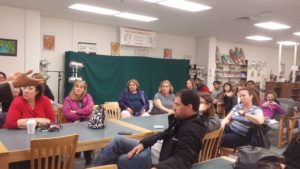 Aside from some unfortunate misconceptions the parents had about Parkside, West and the West Side in general, they simply didn’t see the need to upset a decades long relationship with Southside and Memorial.  Many of them said they’d chosen to be long term renters or homeowners in the Bakersville neighborhood so their kids could go there, then on to Southside and Memorial.  They wanted it to stay that way.

Porter: A school board “creeper.”

Things got a bit testy as, in reply to comments she didn’t like, Want referred to parent Mike Porter, who has been active on school issues and with the Jewett Street Parent Teacher Group, a quote “creeper of the school board.”  Wow… Porter shot back that people like him wouldn’t have to “creep” if the district hadn’t tried to close Jewett St.  Oh SNAP!

Manchester School Board: Can’t we all just get along?

The school board, by the way, will meet today from Noon to three at the Greater Manchester Chamber of Commerce offices on Hanover St. for a facilitated retreat.  The idea is that the board will work with a moderator to set some goals board members can hopefully work on cooperatively so that some of the big issues facing the district can be addressed.  It is open to the public, but there won’t be any cameras recording the meeting, so be sure to stop by.  I’ll save you a cookie!