I’ve seen enough education reformers try to influence how teachers teach in a classroom.  Nellie Mae is known for providing grants to the NH Department of Education and local schools in order to buy local control.

Nellie Mae requires schools to use “student centered” learning even if parents object.  If children are angry because their teacher won’t teach them the material, many times that teacher has been forced to use teaching methods that require him/her to become a “guide on the side.”  Students are required to work in groups to figure out math instead of listen to a teacher explain how to work through a math concept.  This becomes a lesson in frustration for many students who need direct instruction.

Businesses (through the BIA) say they need workers who can work in a team and collaborate.  These are skills that are reasonable and ones you would hope an employee would possess once they were hired.  However, many of us went through school and were never forced to work in groups exclusively to benefit our future employers.  Instead the focus was on academics and literacy.

Some teachers would throw in an occasional group project or maybe we’d learn some of those team building skills from playing a sport. Our public educators had the freedom to make sure we were focused on the academics.  That was the focus of public education.

Today there is a shift away from academics and literacy towards so called “soft sills, or 21st Century skills.”  This forces a teacher to water down the academics in favor of “competencies.”  This isn’t the first time this experiment has been tried in public education.  In the past it’s been called Outcome Based Education.  It’s the fad from the 90’s that tried to turn public schools into workforce development centers.

After several years, parents quickly figured out it was watering down the academics and was eventually abandoned.  Today, it permeates classrooms across the country because it was part of the Obama redesign in public education.  States had to sign on to Common Core, Competency Based Education, and data-gathering in an effort to shift public education away from a focus on liberal arts to a focus on workforce development.

Those who want public schools to prepare their children academically have been pushed to the side.  Instead business leaders believe their voice should be the ones driving public education now.  While many parents would agree that they want their children to be successful in their eventual career, this shouldn’t come at a cost to their academic foundation.  After all, when public education is dumbed down, this limits a child from succeeding in a path they may want to pursue after graduation.

That’s why it’s disturbing to see businesses in New Hampshire allow the BIA to speak on their behalf.  Businesses should be supporting academic excellence, literacy and a child’s ability to reach their highest potential.

I called upon the President of Graphicast Inc. (Chair of the BIA) Val Zanchuck to support our new Commissioner’s efforts to IMPROVE the academic standards for children who attend a public school in New Hampshire.
A few people supported this on his Facebook page, but those were quickly removed. 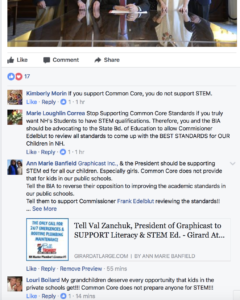 Currently Graphicast Inc’s Facebook page is allowing my comment to support improving standards but in their reply back to me, they continue to support methods that have not been backed up with any independent and peer reviewed studies.  For instance, where are the studies that show academic improvements in the field of math when students are forced to learn through project based learning?

Why are they wanting to tell teachers HOW to teach.? 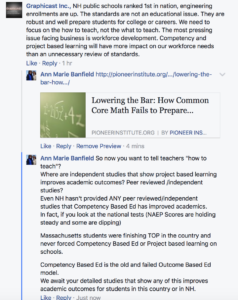 Shouldn’t we leave that decision up to the teachers, parents and local school administrators?  Why are area businesses refusing to support the new Commissioner in his efforts to improve the academic standards AND now wanting to tell teachers HOW to teach?  What if those teaching methods actually hurt the academic outcomes?

For instance, in this Harvard Study, they say that lecture style leads to better academic outcomes in math and science.  This contradicts with what Graphicast, Inc is promoting in our public schools. But maybe they’re concern is for their own needs versus what’s best for the individual child.  After all they admit, “Competency and project based learning will have more impact on our workforce needs than an unnecessary review of standards.”

Their workforce needs?  When did our children become commodities for local businesses?  And wouldn’t a well educated population still be able to meet the needs of their future employers?

Teachers should have the ability to use projects but also to NOT use projects in their classroom.  Teachers and parents have reported problems using this teaching method.  Parents complain that it slows down the learning process, requires the highly motivated students to complete the projects for the slower students and sometimes, creates a chaotic situation in the classroom.

Math teachers know that math concepts have to be explained so children understand them.  They know that with this kind of direct instruction, it is an important component to mastery.  Bogging down a math teacher with project based learning could become a real hinderance to math literacy.

Let’s trust our teachers to make these decisions.  Let’s make sure parents have a voice if the methods are not working well in their child’s classroom.  Bureaucrats and businesses can support academic excellence and literacy, but it is the parent’s voice that should rise above all other voices.  Any efforts to dumb down the academics to please the business community should be rejected by those who are leading efforts to improve the quality of public education in our local schools.