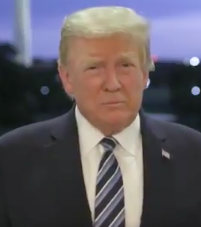 That was actually my first reaction upon learning that President Donald J. Trump had come down with the Wuhan Flu.  (I just named it for the place it came from, like the Spanish Flu came from Spain and German Measles came from Germany, and etc…).  It’s not that I wanted him or the First Lady, or anyone for that matter, to become sick with this virus.  I didn’t. Having had people I know contract this virus, some of which have died, I’m under no illusion that it can be a serious threat under certain circumstances.  While I didn’t know whether or not the President would react to it like the VAST majority of those infected, with mild or any symptoms, or have a more serious reaction, I was glad he was infected nonetheless.

The reason for my reaction is simple.  With the possible exception of people in nursing homes, nobody is surrounded by more protections against the virus than is President Trump, followed by members of the White House staff.  NOBODY sees the President who has not been tested, who is not masked, who has not had their temperature taken, who has not taking the “COVID quiz,” who has not had their hands sanitized, who is not required to be socially distanced.  The President is tested daily, as are members of the staff who see him daily.  for all intent and purpose, he is in as good a bubble as can be constructed by man, yet he still caught COVID.

What’s that say about this situation?

Given that no other institution has been affected as nursing homes/assisted living facilities, it could just be that the virus is going to go where it’s going to go and get who it’s going to get.  Nursing homes, which account for more than 80% of the deaths in NH and a substantial percentage of the deaths nationwide, have, since the beginning, required not just staff and those who service their facilities to wear masks at all times, sanitize their hands upon entry, have their temperature taken and the COVID questions asked, all of the residents have been required to wear masks, had regular temperature checks, no visitors and were socially distanced to the extreme; this despite most states not doing what New York, New Jersey, Michigan and other states did in requiring COVID positive residents to be restored to residency.  Those states have dramatically underreported nursing home/assisted living facility COVID casualties, suppressing the national numbers.

Yes, the President did attend campaign rallies…OUTDOOR rallies where he was well more than socially distant from the crowds; crowds that had their temperature taken, the questions asked, that were given hand sanitizer and masks.  No, not everybody wore a mask, but, hey, they were more than six feet away and the CDC guidance is that masks should be warn where distancing isn’t possible, right?

Moreover, for all of the gnashing of teeth about these rallies, there have been no outbreaks associated with any of them.  It is extremely unlikely that Trump got COVID from a rally and no evidence that he did.

Was Hope Hicks, the first White House domino to fall, the source of the outbreak?  Was it the ceremony where President Trump announced the nomination of Judge Amy Coney Barrett to the Supreme Court?  Did Melania have tea with someone who was unknowingly infected?  Truth is, we may never know where the outbreak originated from.  What we can deduce, however, is that by infecting some in the White House, the China Virus has made it past every precaution determined by “the experts” to prevent, or at least retard, the spread of the virus.  If it can get into the White House and so many nursing homes and assisted living facilities, given all of the defenses constructed and precautions taken, then it can, and will, get anywhere.

Funny thing about this is that Trump’s coronavirus contraction reminded me of something Dr. Anthony “the Infallible” Fauci originally said about masks during an interview on 60 Minutes.  Here, take a look.  It’ll literally take less than a minute and a half:

Thirty one states have mask mandates.  Nineteen do not.  Looking at the data, it would seem that those without mask mandates are, at worst, doing no worse than the best of those with them and, in most cases, doing much better.  Mask mandated Massachusetts is experience yet another “surge” in virus cases.  We here in NH aren’t, at least for the most part. According to this morning’s news, Nashua, which has the toughest mask mandate in the state and one of the toughest in the country (it actually prohibits businesses from serving people with out masks), has seen a big spike in cases, becoming a “red zone” in recent days.  If states, cities, counties, wherever are struggling with increasing numbers DESPITE the imposition of mask mandates, what’s that tell you about their effectiveness?  One can’t conclude they work all that well if they’re looking at things objectively.

While in the hospital, President Trump did exactly what I hoped he would do, and what he should have done:  Communicate with the public about his status.  I remember well President Ronald Reagan’s many trips to the hospital, including after being shot.  The nation was reassured upon seeing he was recovering well, either from the gun shot or from his surgeries. The President’s videos, to, at and returning from the hospital struck the right tone.  They helped calm those who wanted reassurance that he was alright and seemed to consternate those who, perhaps, were hoping for a different outcome.

The media that tried to portray him as if he were on his deathbed flipped out when he did a drive by to thank the many who’d gathered outside of the Walter Reed National Military Medical Center.  Universally condemned by the “mainstream media” for a “publicity stunt” that “endangered the lives” of the secret service agents chauffeuring him, President Trump demonstrated the media prognostications about his condition were, unsurprisingly, totally false.  As to their criticism, not only was the President wearing a mask, the secret service agents in his vehicle were wearing N-95 masks (medical grade ones) plus protective clothing.  If masks are what protects us, and everybody was wearing a mask and more, what’s the issue?

Finally, President Trump addressed the nation from the White House after returning there.  It’s below.  Again, the mainstream media totally lost its mind.  Why?  Did they expect the President to be contrite; chastened because he’d contracted the virus, because of his “irresponsible” behavior?  Did they want him to feed the fear narrative they, along with the Democrats, have relentlessly pushed for the past seven months?  Would they have expected President Franklin Roosevelt to tell the American People they should fear the Japanese after Pearl Harbor?

President Trump was right to encourage people to be not afraid of the virus.  He was right to point out that Americans have access to the best medical treatments, equipment and doctors in the world.  The treatments he received are available to any American who may need them, as are a variety of others, except where they’ve been banned, like hydroxychloroquine by some Democratic governors.

Part of the President’s job is to rally the people, to instill confidence and provide hope in times of crisis, whatever the crisis might be.  Me thinks the media doth protest too much!  (With apologies to Shakespeare.). The truth is, President Trump, having had the virus, can now speak from personal experience.  It isn’t an automatic death sentence.  People shouldn’t be afraid to move on with their lives.  The country needs to get back to work.  People need to return to their jobs, their lives, their kids to their schools.  We’re Americans and we can handle it without cowering in fear!  That’s what I took from what he said and it is what I had hoped he would say once I heard he and the First Lady had contracted the virus.  Watch below and ask yourself, what would you have rather him say to inspire confidence and challenge the narrative of panic and fear?

Committee on Human Resources and Insurance