Two days to Valentines Day!  Have you placed you order with Jacques Flower Shop yet?  Time’s a wasitin’

The Goffstown Budget Committee has denied a request from State Rep. John Burt, a candidate for selectman, for a video copy of one of its public meetings.  Goffstown policies require those in search of meeting tapes to obtain the approval of the public body that held the meeting as it considers them the copyright holder of the video, even though the meetings can be streamed from an online archive.  In accordance with that policy, Burt filed a request with the Budget Committee several weeks ago.  The committee voted unanimously to table a motion denying the request, with chairman Peter Georgantas, Burt’s opponent in the race for selectman, abstaining on the vote.  Because they’re not scheduled to meet again before the town elections, Burt believes the committee acted to prevent him from using the tape of the PUBLIC MEETING to bolster Georgantas’ chances in the coming election.  He said he’d asked for the video before Georgantas filed his candidacy, so his request had nothing to do with him, and even if it did, it’s wrong for a public body to deny any member of the public copies of the public meeting video.  Video of the meeting is available online at the Goffstown T V Web site, however, it can only be streamed, it cannot be downloaded and clips of desired information cannot be copied.  Goffstown T V Director Adam McCune told Girard at Large the station’s board was planning on reviewing its polices governing the public’s access to public meetings.  We’ve posted minutes of the meeting showing their action and the unbelievable reasoning they had for doing it.  You can bet we’ll have something to say about this.

Meanwhile in Goffstown, the Library has been forced to remove information supporting a thirty five thousand dollar warrant article to spruce itself up.  Goffstown Today dot com publisher Bill Wynne filed a complaint with the Board of Selectmen at its meeting Monday night accusing the library of violating the state’s laws against electioneering, which prevent taxpayer funded entities and employees from using taxpayer resources to influence the outcome of elections.  In testimony before the selectmen, Wynne said the matter was brought to his attention by a reader of his publication who didn’t think it was right for the library to use its Web site to advocate for the expenditure of town funds on its behalf.  The offending material was removed from the site yesterday.  Wynne will be in this morning to share details on both situations.

Hooskett School Board Vice Chair David “The Pariah” Pearl has told Girard at Large he left the school board’s non-meeting meeting with its lawyer on Monday because Board Chair Trisha “The Gavel” Korkosz asserted that Superintendent Charles Littlefield was every bit a member of that board as the elected members and even could vote if he wanted to.  If I have the story right, she persisted in that view to block Pearl’s request that Chucky the Super leave the room so the board could confer with its attorney in his absence, despite being told by that same attorney that superintendent was not part of the board and could not vote.  The school board has scheduled a special meeting to deal with administrator complaints against member John “The Elf” Lyscars for the nineteenth, but has no plans to deal with the complaint filed by resident Jason Hyde against Chucky the Super who, you may recall, threatened to tear his “effing esophagus out” following a meeting in November.

While we’re in Hooksett, we might as well tell you that the board accepted an allegedly impartial and factual presentation created by the committee it established to promote passage of Warrant Article Three, which seeks approval of the tuition contract with Pinkerton Academy.  The two who gave the initial presentation, Jack Sweeney and Yvonne Preston, are school board candidates seeking to curry favor with the pro-Pinkerton crowd in town.  They prattled on about the wonders of Pinkerton, warned about the unacknowledged consequences if the town rejects the contract, reminded everybody about the allegedly sordid history with Manchester and said that Pinkerton, at ten thousand seven hundred dollars a student, was less expensive than Manchester at ten thousand two hundred dollars per pupil because they had to pay capital costs to Manchester.  They failed to say that those capital costs would be paid no matter where the kids went to school.  They also failed to share any similar information on Manchester’s schools about numbers of classes, extra curricular activities, dual credit courses, special offerings, athletics and the rest of it.  Not to worry, though, their mission was to present the town with objective facts about their choice.  The full presentation will be made tonight, with Pinkerton representatives available to answer questions from the public.  Don’t expect Manchester or any other schools with which they have agreements to be present.  They weren’t invited, a point that will be clearly made when board member John Lyscars releases the results of an email he sent to Manchester and other school districts asking if they’d been invited to attend the board’s high school informational session tonight.

Finally this morning, a shout out to the kids at Hillside Middle School in Manchester.  In raising five thousand dollars for the Leukemia and Lymphoma Society thorough its Pennies for Patients campaign, they broke the state’s previous record of forty seven hundred dollars raised and they did it on their first try.  Nice work kids! 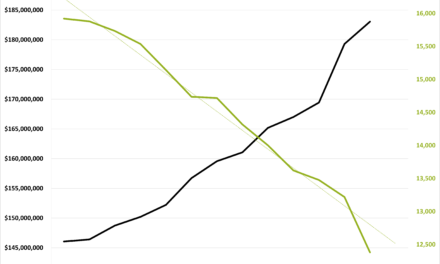