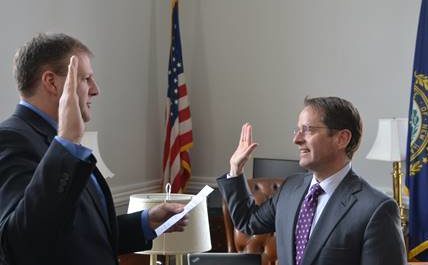 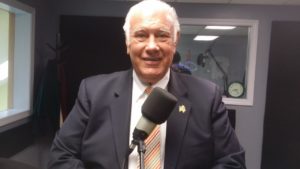 Manchester Mayor Ted Gatsas released his proposed budget at a special meeting of the Board of Mayor and Aldermen last night.  The half hour address was built along the theme of connections made within the community.  Highlighting the success of the programs he created to systematize motorized vehicle replacement and road work, Gatsas proposed continuing the programs, funding each at about three million dollars.  He also announced that one and a half million dollars would be committed to reconstructing all of Elm Street, saying the poor condition of the city’s main drag was a drag on economic development and reflected poorly on the city’s image.

The big winner of the night was the police department.  Its budget jumped by more than ten percent, nearly two and a half million dollars, largely to fund the union pay raises Gatsas vetoed.  Gatsas did cover most of the school district’s revenue losses to prevent a major funding cut.  Nonetheless, he funded the schools at about one hundred sixty five thousand dollars less than the current budget.  Many other departments took cuts of various levels and non departmental items, like severance, contingency and C I P cash items took drastic to complete cuts.

The budget stays within the caps required by the city charter. 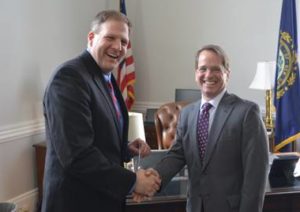 Sununu and Edelblut: All smiles after a long haul 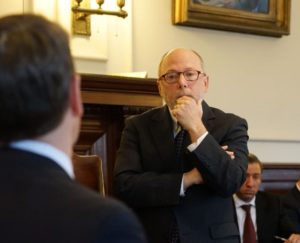 During the Council’s public hearing on Edelbut’s nomination, Volinski both persecuted and prosecuted Edelblut for being a Christian, arguing it disqualified him from the position.  Pappas inferred that Edelblut was a danger to L G B T students because he’d opposed a bill on conversion therapy as a state representative.  Both criticized him as unqualified because he had no teaching experience, no typical education credentials, and had home schooled his seven children.

We’ll have to ask Volinski and Pappas why they didn’t speak out against the former occupant of the White House’s nomination of Arne Duncan to be Secretary of Education.  He wasn’t a teacher, had no professional education credentials and sent his kids to private school.  But, I digress.

Frank will do an outstanding job and will work tirelessly to improve our state system by implementing a 21st century education and preparing students to enter into an increasingly-competitive global workforce. 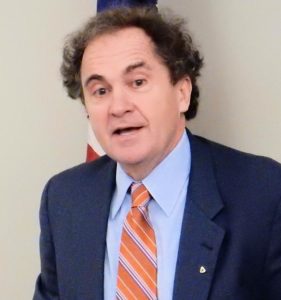 In nominating Edelblut, Sununu emphasized not just the need for change, but also the need to improve local control, parental rights and educational choices.  Edelblut shares Sununu’s commitment to scrap the Common Core national standards imposed by the state Board of Education on local districts.

Senate President Chuck Morse, Republican from Salem, also weighed in on Edelblut’s confirmation, issuing a statement of congratulations and expressing confidence in his ability to quote:

reinforce the effective public education system that has always been attractive to families and students in our state.

The non partisan Cornerstone Action, a conservative advocacy group that backed Edelblut’s nomination, issued a statement from Shannon McGinley, a member of its board of directors, thanking the council for its vote, saying Edelblut quote:

understands that children are ill-served by a one-size-fits-all approach to education. He trusts parents to make wise decisions regarding their childrens’ education. He trusts local boards and teachers more than the federal government when it comes to making curriculum choices. All of this, plus his extensive administrative experience, make him an excellent choice for Education Commissioner.

Registration functions to be shut down

The inability to transact this business is a result of the D M V’s conversion to new software to comply with the federal REAL I D Act.  The conversion will cause service outages at every municipal and D M V location in the state during this time.  Plan accordingly.  We’ve got phone number 2 2 7 – 4 0 2 0 and Web links with this news read at Girard at Large dot com for anyone interested in more information about REAL I D.

The top three finishers of the spelling bees at Manchester’s Hillside, McLaughlin, Parkside and Southside middle schools will compete for the City Championship tonight at Parkside, starting at six thirty.  We’ve listed the names of each kid who will represent their school with this news read.  I won’t say them over the air, primarily because I won’t be able to pronounce half of them and don’t want to be accused of being “culturally insensitive.”

Representing their schools are:
(*Indicates students who will compete in the state spelling bee on February 25.)